I’m so excited to introduce you all to my friend L.A. Dale!  She lives on acreage in the country in Western Australia with her long suffering and handsome husband, Big G, and two dogs Poppy and Charlie. She has two fabulously talented children and a posse of girlfriends all over Australia who are silly enough to indulge her rants on various subjects. On a good day ~ when not at her day job ~ L.A. can be found lurking around Twitter and Facebook replying to followers comments, stalking Super Rugby (Rugby Union) coaches or generally seeing how much useless information she can write in 140 characters or less before popping by her blog or trawling internet clothing sites. She is a hopeless rugby union fanatic, chocoholic, over-exaggerator, trashy TV, music and iPhone addict. If you can't Google it then it's not worth knowing!

Daisy Darling Meets A Man is absolutely–well–darling!  Tell us about the difficulties in developing and revealing characters quickly for a novella, versus the opportunity to slowly bring them out in a novel. 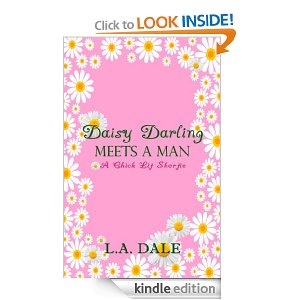 Thanks for asking the tough question first. J As this was my first attempt at a novella, I didn’t find it all that difficult possibly because I knew I had a limited amount of words so I just got straight into it.  In a novel length story it’s nicer to reveal things about the character slowly, you don’t want to have 10 pages of backstory in the beginning as it puts readers off. With Daisy I wanted people to know she’d been left but not why for a while so that was easy.  I think you have to do a lot more showing of the character’s personality through their actions in the novella too, you don’t have time to develop. So when Daisy discovered it was her idol in her shower, for instance, she went into a frenzy of getting changed and worrying about what he would think.  I actually thought quite a lot about what I would do if Bono appeared at my door for that scene. J

Oh Bono…  I love him too!  He just cannot live with or without you, girl!

I know you are an iPhone addict.  What is the latest app you’ve downloaded that you love?

I don’t actually collect a lot of apps funnily enough, but those I do have I use constantly.  I love my horoscope app because it sort of sounds like it was written for me personally. Yesterday, while sitting in the Plastic Surgeon’s office for two hours, I played my ‘learn French’ app.  That’s really cool and I play it a lot though I have no idea what rhinos falling out of the sky in parachutes has to do with learning French.  I want to be better at French so I don’t look like a dufus when I go to France next year. I am also a VERY BIG Bejeweled Blitz player and Tweeter.

I love Bejeweled Blitz too!  My dear friend, Mary, has that on her phone and every time she visits my daughter, Gracie, asks, “Can I play ‘bubbles’ on your phone?”  So funny!  I’m big on the game Words With Friends.  It’s like Scrabble without the “table talk.”

How do you balance the many hats you wear: Mom, wife, day job?  It can be a struggle for so many writers.  How do you make it work for you and your family?

My children are grown up now and live in the Perth (I live in the country, obviously) so that hat requires less time these days, unless they’re ringing me up to ask me how to cook something or to tell me to get them One Direction tickets on the net. When they were younger, I used to thank God for inventing laptops because I wrote a lot while waiting in the car at ballet classes and rugby training.

These days, I only work four days a week at my ‘day job’ so that gives me three days, plus evenings,  to write, though I do get a bit side tracked watching rubbish on TV. Quite often, when everyone is sting around watching something, I’ll have the laptop out fiddling. Plus Big G, my hubby, works away from home and is only home for five days at a time.  I wrote the whole of Angel’s Bend while he was away once.  If I get on a roll, I get a bit obsessed and rather peeved when I have to stop writing to do something else. I almost turned down last minute free concert tickets once because I was in the zone.  Luckily I came to my senses.

I know those tickets couldn’t have been to see U2!  Otherwise, there would’ve been no question, right?

You have been very open and honest in your blog, Well, That Sucks, about your battle with breast cancer.  There is not one human on the planet who hasn’t been touched by cancer, whether their own struggle, or battled it alongside a loved one.  My father is a colon, liver and prostate cancer survivor.  What motivated you to share your intimate struggle with so many and in a public arena like your blog?

Money? The chance to have a bestseller?  Sorry, I shouldn’t take the piss. My motivation was actually those damn cancer blogs.  I’m sorry to say this but a lot of the people that post on them are such whiners.  Yes, you have no boobs, yes you had to have chemo or radio but you’re still alive! I mean, seriously, there’s not a great deal you can do about having cancer, so you may as well just deal with it get on with life. Anyway, I got so depressed reading all that sad stuff and I thought there must be other people like me who just want to read something funny to cheer them up.  So I started the blog and I try to only post amusing things.  And believe me, I can make even mundane things sound amusing if it involves a hospital gown and a hot doctor.

You had me at hot doctor!  In all seriousness, you know many are cheering you on and have been touched by your blog.  Thank you for sharing tales of two boobies with us all.

What are you cooking up on your keyboard for readers now?  Details!

At the moment, I’m finishing off the sequel to The Taming of the Bastard.  It’s called The Bastard Takes a Wife.  It goes through all of the trials Sam and Millie have on the road to their wedding.  Needless to say, not having been a bride myself for a few years, I’ve had to do lots of research by watching ‘Bridezillas’, ‘Say Yes to the Dress’ and ‘Don’t Tell the Bride’. Taming was never actually meant to have a sequel but so many people have messaged me to do one that I sort of committed to it.

After I finish that, I’m writing the ending to Lucifer’s Mark which is the sequel to Angel’s Bend.  I haven’t decided yet if Cam and Lacey will have a third adventure or if he’ll give up being an angel to be a boy but I’m sure I’ll know by the time I get to the end of the book.  I’m hoping to release both of these by the end of 2012 as they’re both half written.  Then it’ll be back to the other 5 projects that are almost done too.  I really want to get Aidan & Eloise done because I think people will really fall for that one, seeing as how it’s a modern take on Romeo and Juliet.

One of my favorite stories you’ve written is Heart of Glass.  In 1987, I was the proud owner of big hair, blue mascara, and spent more than I earned at the clothing store I worked at.  What was it about that period in the 80’s for you, that you centered the beginning of the book around it? 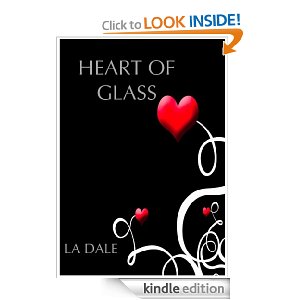 I lived through it! I actually channeled Madonna. J

Seriously, though, I was only just eighteen in the beginning of the eighties and I knew a boy very much like Ben. He lived on the other side of the state and was older than me. I suppose he was my first big crush but he dumped me, and I always wondered what would have happened if things had been different. So I made up a story about the ending.  Not that I ever took drugs, caught bad diseases or had sex up against a wall, mind you but by the time it got to that part of the story I was so deep into Bella’s character I wanted to show how much her love for Ben and not being able to have him, affected her. It seemed logical that she would become self destructive in an attempt to wipe him from her mind. Heart of Glass was the first story I ever wrote so I guess it was a bit of ‘go with what you know’ too.

You and I are going for tattoos.  Won’t that be fun?  *Jen elbows L.A. to make sure she says, “YES!”* I’m going to be the lucky recipient of two on this day.  One, the infinity sign as a symbol of love for my hubby.  The other, each of my children’s first initials morphed into a design, yet you could clearly pick out their distinct letter.  Tell me about your tattoo and why you would choose it.

Haha. I can do better, I can show you.

This is the henna tattoo I got as a joke to show how many times I’ve been to see U2 live (there’s a third date under my sleeve) and no, it’s not that big!!! I did it as a prank on a friend who hates tattoos. So, if I got a tattoo, a better version of the suitcase would be it J 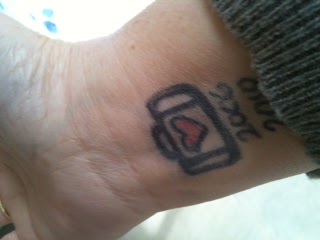 Look at you, L.A!  You totally called my bluff in the most outstanding way!

What books are on your nightstand?

At the moment, I’m reading Kat Fight by Dina Silver and have the new book by Caitlin McKenna to come.  I tend to read mostly in the chick lit genre when I’m in the writing zone but I also like paranormal and historical romance as well as classics.  My favourite book of all time is Tess of the D’Urbervilles by Thomas Hardy.

LA's favorite book is FREE on Kindle!  Click here to pick up a copy!

As a special gift, I am giving away one KINDLE copy of Daisy Darling Meets A Man to one lucky reader!  To win, just comment below on your favorite band from your youth.  Please leave your email so I can contact the the lucky duck!  One winner will be chosen at random.  You must leave your email and comment to be eligible.  CONTEST CLOSES Aug 3, 2012 at 9:00am EST

Thanks for stopping by!
XOXO
Jen