Tricks and Treats with Meredith Schorr


Good morning all!  Meredith Schorr is stopping by Princes with a Pen today, to chat about Halloween goodies.  It really boils down to the costumes and candy anyway, right?  Meredith is a talented author, lovely gal, and someone wonderful to always have on your side in a dark alley.  Her new novel, A State of Jane is one you'll want to pick up.  Let’s give her a big welcome!

Thank you so much for having me on your blog, Jen!  I’m so happy to be here, talking about one of my favorite holidays, Halloween!

The Ticks and Treats of Halloween 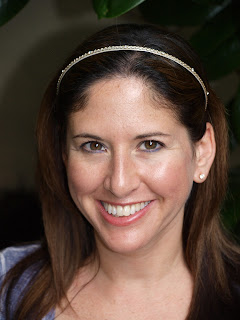 I've always loved Halloween. When I was little, it was all about the candy. I loved the mini Hershey bars, Kit Kats, Reese's Peanut Butter Cups etc. I hated those houses that gave out boxes of raisins. Or loose change! My mom did that one year and I was mortified and didn't want any of my friends or the cooler, more popular people to ‘trick or treat’ at my house.  The worst were those houses that gave out loose, unpackaged candy like a handful of candy corn because I wasn't allowed to eat it! And I would never eat an apple because, for one thing, Halloween was supposed to be about candy not fruit, and then there was the ever frightening threat of a razor blade! Then one year, there was an incident of arsenic in the chocolate so I had to examine every piece to see if there was a needle hole. Kind of sucked the fun out of the day.

As I got older the lure of Halloween was less about the candy and more about the party. While I was somewhat of a goody goody in high school, I loved to party in college and Halloween lent itself to some of the best parties of the year, second only to St. Patrick's Day (my absolute fave, but that’s a whole other blog). 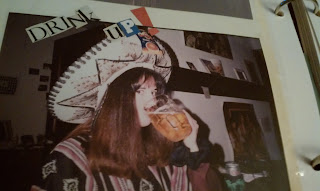 As much as I have enjoyed Halloween through the years, choosing a costume has always been a bit stressful. I am not creative that way. I can conceptualize an entire novel and see it play out in my mind like a movie but I've never been good at the "art" stuff and that includes everything from my horrendous third grade level hand writing, to stick figure drawings, unimpressive dioramas made out of shoe boxes for book reports, and yes, creative Halloween costumes. Except when I coupled up with others, my Halloween costumes have been historically unimpressive: a hippy, a nurse (although I felt sexy in my short white dress and managed to make out with a guy dressed as a doctor that year), Punky Brewster (no one had any idea who I was supposed to be and my rainbow shirt mislead others to think I was representing the gay/lesbian alliance), a goth girl (again no one knew who I was supposed to be) and other costumes that were so unmemorable, I can’t even remember them! 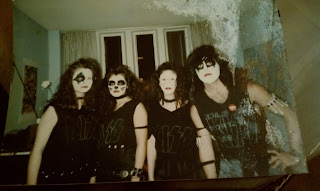 But I've had some good costumes through the years as well. Sophomore year in college, two of my suitemates, a guy who lived across the hall and I dressed up like the band Kiss. I was Ace Frehley. Thanks to my suitemate Gina who was Peter Criss, our makeup was flawless. I had the best time that year except I got totally hammered, passed out in full makeup and proceeded to scare the shit out of myself when I looked in the mirror the next morning and saw Ace looking back at me. Another fun year was junior year (or senior?) year of college when I teamed up with two of my housemates to be The Three Amigos. I cut the mustache off of a Pringles container and cannot for the life of me remember how I got it to stick to my upper lip. I also got to wear a sombrero but the best part was carrying a fake gun and aiming it at everyone all night. I mostly used it to cut the line at the keg. I recall threatening, "A beer or your life!" That was most definitely a fun year.

I must confess that my love of Halloween has dwindled over the past few years. If the Yankees are still in the baseball playoffs by then, I always choose watching the game over going to a party. Last year I visited my boyfriend in that weekend and while his friends invited us out with them, we skipped it although we stopped by so I could meet them. Since they were in full makeup (face paint and wigs), I had no idea who I was actually speaking to. Maybe it's always been like this and I was just too naive to notice, but I feel like after a certain age, which keeps getting younger and younger, Halloween is merely an excuse to wear as little clothing as possible and looking like a slut under the guise of being “in costume.”

I have no idea what I am going to do this year for Halloween.  For one thing, it depends upon the Yankees.  But if I go to a party, I am toying with the idea of dressing as a female Santa Claus. There are some really sexy versions of the costume out there and I might look like a slut but since its Halloween, no one is allowed to hold it against me J

Thanks for stopping by Meredith!  I always felt cheated when I was given those popcorn balls instead of some candy while trick-or-treating.  What’s up with that anyway?

Bless and be blessed,
XOXO
Jen

Author Bio: Meredith Schorr is the author of two novels, Just Friends with Benefits and A State of Jane.  When she is not busy writing novels, Meredith spends her days as a trademark paralegal at a law firm in .  Meredith is a loyal New York Yankees fan and an avid runner.  She also loves to read and is always on the lookout for her new favorite author.

Blurb of A State of :

Jane Frank is ready to fall in love.  It's been a year since her long term relationship ended and far too long since the last time she was kissed. With the LSAT coming up she needs to find a long term boyfriend (or husband) before acing law school and becoming a partner at her father's law firm.  There's just one problem: All the guys in are flakes. They seemingly drop off the face of the earth with no warning and no explanation.  Should she join her best friend Marissa in singlehood, making cupcakes and watching True Blood? Or should she follow her co-worker Andrew's advice and turn the game back on those who've scorned her? As Jane attempts to juggle her own responsibilities and put up with the problems of everyone around her, she starts to realize that the dating life isn't as easy as she originally thought.

Also available on itunes but there is no link to attach.