Taming of the Guilt with Pj Schott

Hellooooo from snowy Indiana!  We’ve been digging out this morning, and well as enjoying a school-free pajama day after almost six inches of snow.  It’s also the first Wednesday in March, which means the über fab Pj is here!  Pj Schott has lived in several U.S. port cities, Europe, Greece, and the Middle East. A marketing professional, mystery writer, and futurist, Pj is known to those with whom she works as a problem-solver, an innovative thinker, a top-notch communicator, a visionary, and the soul of a group. She is the owner of the Boston, Massachusetts based company GENIUS and is the woman behind the new Facebook page and blog, Survival for Blondes, where Pj is entirely surrounded by imagined disasters and learns to rise above.

"But it isn't easy," said Pooh, "Because Poetry and Hums aren't things which you get, they're things which get you. And all you can do is to go where they can find you."

It's time to pack my bag and take a business trip. I must go out and search for my Poetry & Hums. However, this doting mother of two fabulous felines is filled with dread. As soon as I make the travel arrangements I start missing my girls. I mean, really. Look at them.

Can you stand it? Prudence, the Ragdoll (on the left) doesn't mind a bit. Poor thing is beautiful, but dumber than dirt. Except when it comes to her food supply. Then, all of a sudden, she's a rocket scientist with the uncanny ability to make me do her bidding. That girl knows how to suck up, let me tell you. And if that doesn't work she turns into the feline equivalent of Attila the Hun.

On the right is Basile, a Russian blue. Totally devoted to me, she becomes a basket case as soon as she sees the suitcase. Won't eat. Gets in the suitcase and cries. Then hides from the cat sitter the entire time I'm gone. Oh, the guilt. The guilt ….

So there I am trying to talk myself out of a funk. As always, when desperate, I seek out the wisdom of our great guru, Winnie the Pooh. And, in my mind, I go to the Hundred Acre Wood, the fictional world of Pooh and his friends. And this is what he said.

"Sometimes, if you stand on the bottom rail of a bridge and lean over to watch the river slowly slipping away beneath you, you will suddenly know everything there is to be known."
Long story short, and quite simply, I realized that life has its share of bittersweet moments. We have to take the bad with the good.

The bad: it's so hard to say goodbye, even for a short time.

The good: I am blessed to have something I love that much. 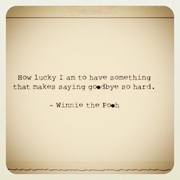 I’m so glad to know I’m not the only one who is on the receiving end of pet guilt!  Thank you, Pj, for talking about the bittersweet along with the blessings.  Thank you too for sharing Prudence and Bastile with us!  I want to cuddle with them, yet the results would be me and my Epipen.  Stinking feline allergies…

Pj is giving one lucky reader this… 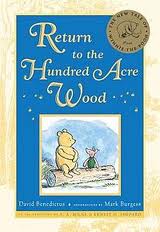 Product Description
It was eighty years ago, on the publication of The House at Pooh Corner, when Christopher Robin said good-bye to Winnie-the-Pooh and his friends in the Hundred Acre Wood. Now they are all back in new adventures, for the first time approved by the Trustees of the Pooh Properties. This is a companion volume that truly captures the style of A. A. Milne-a worthy sequel to The House at Pooh Corner and Winnie-the-Pooh.

Yay you!  The winner can choose a print copy, audible edition, or Kindle + audible (Whispersync) edition.
RULES:
*Contest runs from March 6, 2013 through March 13, 2013 at NOON EST.
*Contest is open worldwide, because PJ is AWESOME and will have Amazon ship to you anywhere!  Yee Haw!
*Comment below and tell us what you’re thankful to return home to.
*GOOD LUCK!

Bless and be blessed,
Pj & Jen
XOXO
Posted by Unknown at 1:05 PM