I am pleased as punch to welcome the über cool Sibel Hodge to Princess with a Pen today.  She is a talented writer who has just released her first cookbook, A Gluten Free Taste of Turkey.  I had a chance to preview this delicious book, and I have to tell you; this celiac has a newfound love for cabbage that’s sexy and it knows it.  Please welcome my sweetie pie, Sibel! 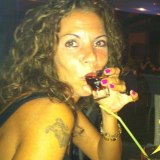 Merhaba! A big Turkish-style hello to you all. I’d like to thank the fantabulous Jen Tucker for inviting me onto her blog today to talk about my new gluten free Turkish cookbook A Gluten Free Taste of …

I have dual Turkish Cypriot/British nationality, and although I was brought up in the , I now spend a lot of my time in the Turkish (it definitely beats the British weather!). My dad emigrated to the UK from Cyprus in the late 1950s when he was a teenager, and he went on to meet my English mum, so I’ve had the best of both worlds as far as cuisine and culture goes.
I’m the author of quirky romantic comedies, mysteries, and children's books (with the odd thriller thrown in), and in my spare time, I’m Wonder Woman! When I’m not writing or saving the world from dastardly demons, you can find me in the kitchen, cooking up a storm.
From an early age, I developed an interest in food and would spend hours in the kitchen with my nan, who was a fabulous chef. From about ten years old I was cooking the family dinner on a regular basis, and that’s when I learned that in order to cook well, you had to love and appreciate food.
During this time, I don’t remember seeing any ready meals or pre-cooked sauces in our house. cooked everything from scratch, which actually prepared me well for when I met my husband, who just happened to be coeliac and needed to follow a gluten free diet.
‘I’m coeliac,’ he admitted sheepishly, just after I’d invited him round for dinner early on in our relationship.
‘Coeliac?’ I gave him an odd look, thinking he was trying to prepare me for some bizarre sexual quirk that sounded a bit dodgy.

Well, I breathed a huge sigh of relief, I can tell you, when he explained to me he had a disease that meant he was unable to eat gluten, not someone who wanted to dress up in lederhosen and be slapped with stinging nettles. Then I thought, unable to eat gluten? That must be really horrible, but how difficult can it be to cater for that? Well, not as easy as I first thought… 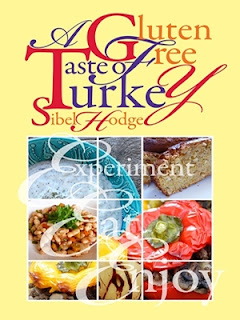 Gluten is found in barley, wheat, rye, malt, and oats, and is in most processed foods, so trying to avoid it in those days was a nightmare for a lot of people. A simple trip to the shops took hours as I scrutinized every packaged item looking at the ingredients. As well as being blatantly labelled, it’s often disguised as “thickener”, “stabilizing agent”, “shortening”, and many other things. I nearly fainted from shock because it seemed to be in everything, even the simplest of things like cereal and ice cream, and I didn’t want to accidentally bump him off with a gluten-laden knickerbocker glory (although, I must admit there have been several occasions over the years that I’ve seriously thought about it!). A gluten free aisle was unheard of back then, and he could only get gluten free bread on prescription, which was the consistency and taste of a thousand-year-old house brick. Great for renovating early nineteenth century manor houses but not so good for a nice cheese sandwich. Luckily, now there are hundreds of gluten free foods available in the supermarket and from specialist stores, which is great news, because wheat and gluten intolerance is on the rise.

Even if you’re not coeliac or gluten intolerant, many people are turning to a gluten free diet because it can have many health benefits, including an increase in energy, better digestion and elimination, improving cholesterol levels and auto-immune disorders, controlling weight and bloating, and making you super attractive to the opposite sex (OK, I made the last one up, but I bet it made you want to read on!). Whereas twenty years ago, a gluten free diet would be bland and boring, today it can be eclectic, vibrant, and delicious, which is why I wanted to mix my knowledge of tasty, easy-to-cook, and nutritious Turkish food with gluten free recipes.
Cue A Gluten Free Taste of Turkey, which is a mixture of traditional Turkish cookery, along with dishes that have a Turkish Cypriot twist to them, and my own creations. Our hectic and stressful modern lives mean we want food that not only tastes great, but is also quick to get on the table, and these are the kinds of recipes I want to introduce you to in this book.

Historically, has been a cosmopolitan melting pot of ethnic groups such as the Ottomans, Byzantines, and Persians. It’s bordered by Greece, Bulgaria, Georgia, Armenia, Iran, Iraq, Syria, and the Mediterranean and Aegean seas, so it’s no wonder that the food is a colourful fusion of traditions, countries, tastes, and deliciousness (I don’t care if that’s not a word since it describes Turkish food perfectly). Turkish cuisine is considered among the world’s best because of the variety of dishes, the use of natural ingredients, and a huge mixture of flavours and tastes. It’s also a very healthy diet, with lots of vegetables, grains, beans, herbs, olive oil, spices, and fruit.

While it’s fantastic that nowadays we can walk into a supermarket and find any kind of item from all over the world, whatever time of year, it does have its drawbacks. In order to cope with our food demands we’re increasing the amount of chemicals in our environment. Pesticides, bulking agents, hormones, chemicals that make a fruit or vegetable look a better colour, chemicals that increase the shelf life of consumables, and the over processing of food. All these things make our immune systems more sensitive and susceptible to problems, and affect our overall health, which is why intolerance to gluten and other allergies or insensitivities are on the increase. In a North Cypriot supermarket or market you’ll find fruit and veg that have grown in the shape nature intended, unlike a supermarket in the UK, where a tomato has to pass a tomato circumference test and be colour matched to a pre-conceived idea of what shade it should be, because shock horror, no one would possibly want to eat a tomato with a knobbly bit on it, or a potato that looked like a duck (I’ve found several of those in North Cyprus, plus quite a few in the shape of a heart, which is very cute!). Essentially, the Turkish diet goes back to the basics of cooking from scratch, with an emphasis on using fresh seasonal produce, with a lot of organic methods, just like our ancestors did for thousands of years.

Turkish and Turkish Cypriot people love to eat, therefore they love to cook! Hospitality is second nature, and you can’t visit any friends or family (or even strangers) in without being offered something to eat and drink. The sharing of food is almost as important as the preparation and the eating of it.  It’s all about vibrancy, taste, enjoyment, colour, and yet at the same time, simplicity.

Cooking, like writing, is a creative expression. You can take an ingredient, add a dash of colour, a sprinkling of spice, a few drops of imagination, and a splash of passion, and it can turn into something truly amazing. And the fantastic thing is that you can make a dish completely your own by changing some of the ingredients. The recipes included in this book should be used as a guideline because you know your taste buds better than anyone does. If you want to substitute, say, parsley for coriander, or cinnamon for cumin, then go for it. It’s all about making the food work for you. Wherever you can, please try to use organic ingredients. It’s kinder to the environment and animals, and it’s healthier for you.
The most important thing in cooking is to have fun with it, so experiment, eat, and enjoy! And, as we say in Turkish…

Thank you for stopping by Sibel!  You can find Sibel, her new book, and Sibel herself below.  Thanks so much for spending time with us today!
XOXO
Jen

A Gluten Free Taste of  is available to buy now in ebook format for Kindle from:

It's also available in paperback from Amazon.co.uk:  and Amazon.com:

You can visit Sibel Hodge at her website!
Posted by Unknown at 6:15 AM