Heart vs. Head with Pj Schott

HAPPY NEW YEAR!!  *Jen throws confetti*  I hope you enjoyed family and friends, and even a little piece of peace during the holidays.  It’s a new month, a new year, and I am pleased as punch to welcome Pj Schott back to Princess With a Pen!  Pj has lived in several U.S. port cities, Europe, Greece, and the Middle East. A marketing professional, mystery writer, and futurist, Pj is known to those with whom she works as a problem-solver, an innovative thinker, a top-notch communicator, a visionary, and the soul of a group. She is the owner of the Boston, Massachusetts based company GENIUS and is the woman behind the new Facebook page and blog, Survival for Blondes, where Pj is entirely surrounded by imagined disasters and learns to rise above.

HEART VS. HEAD
In which Pj learns to trust her feelings and not think so much

Most folks would describe Pooh as a bit of a dunce. But the warm, welcoming bear is a master of the art of living in the moment. Pooh neither dwells on the past nor worries about the future. And he always follows his heart.

FEEL, DON'T THINK
Our society places great value on the ability to analyze and evaluate things. But Universal Law teaches us that the heart and the head are mutually exclusive. You can't be in both places at once. And, given the choice, it is better to rely on the heart than the head when making an important decision.

Pooh was never one to overthink a situation. Philosophers might call him a stoic. He doesn't worry about what other people think. He knows better than to react emotionally to a situation over which he has no control.

In the spirit of stoicism, or Poohism, we would therefore focus only on what we have control over, which is our reaction to a situation. We can't control what others think, feel, or do. But we alone choose what goes on in our own heads. The wise, and Pooh-like among us, would ask "Do I respond or do I react?"

REACTION OR RESPONSE
You're running late for an important business presentation, when someone crashes into you in the coffee shop, covering your best jacket with foamy liquid. You start to panic. Anger rises. You resist the urge to smack the offender, who actually looks remorseful.

To berate the poor thing would be to react to the situation. You do a quick check-in with your heart, which says, given the choice to be right or to be kind, be kind. Then you respond to the situation at hand, letting your heart rule your head.

Now you use the old noggin. You face your audience, point out the puddle on your chest, and joke about having to let the guy pay for your coffee in order to make him feel better. Voila, you're an instant hero.

Pooh would always choose heart over head. But if ever he needed to apply logic, he would simply go to Rabbit, with reservations. 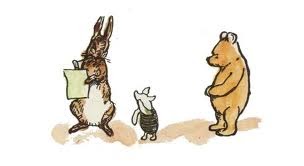 LOVED THIS!  Thank you, Pj, for stopping by!  You lucky readers will love hearing that, Pj has a gift for you!  She loved the feeling of blessing others so much, that it is something she wishes to carry out  during 2013!  Isn't she the best?  Simply let us know what you trust more, your heart or your head for a chance to win…

The Complete Tales of Winnie the Pooh! 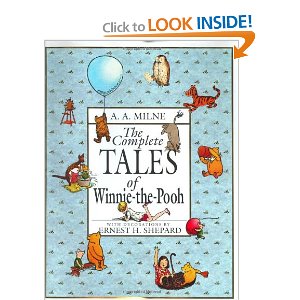 Description from Amazon: When Christopher Robin asks Pooh what he likes doing best in the world, Pooh says, after much thought, "What I like best in the whole world is Me and Piglet going to see You, and You saying 'What about a little something?' and Me saying, 'Well, I shouldn't mind a little something, should you, Piglet,' and it being a hummy sort of day outside, and birds singing."
Happy readers for over 70 years couldn't agree more. Pooh's status as a "Bear of Very Little Brain" belies his profoundly eternal wisdom in the ways of the world. To many, Winnie-the-Pooh, Piglet, Eeyore, and the others are as familiar and important as their own family members. A.A. Milne's classics, Winnie-the-Pooh and The House at Pooh Corner, are brought together in this beautiful edition, complete and unabridged, with recolored illustrations by Milne's creative counterpart, Ernest H. Shepard. Join Pooh and the gang as they meet a Heffalump, help get Pooh unstuck from Rabbit's doorway, (re)build a house for Eeyore, and try to unbounce Tigger. A childhood is simply not complete without full participation in all of Pooh's adventures. (All ages) --Emilie Coulter

Bless and be blessed,
Jen
XOXO
Posted by Unknown at 9:55 AM