Dancing With the Stars Week 4 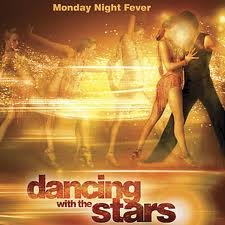 Welcome to week four of our coverage of, Dancing With the Stars!  As always I am joined by fabulously popular blogger, Michelle Bell; talented author, Tracie Banister; and my Matt Lauer loving, five-year-old daughter, Gracie.  I have to say that Seal’s performance during the elimination show must have been fate to quell my pain for Frisco Jones heading out of the ballroom.  I knew Jack Wagner was in jeopardy of being in the bottom three, but I did not think he would be the one to exit the building so soon.  Gavin DeGraw is the feline of the bunch, whose nine lives are ticking away each week.  It will be interesting to see who goes home after Rock Week.  Let’s get to it!

Standout Performance of the week:
Michelle: Donald and Peta! They brought fire to their Paso and Donald brought his A-game this week.  Bravo to Peta for brilliant choreography!
Tracie: I just told someone yesterday (prior to the show) that she shouldn't discount Donald Driver as the winner this season.  He's been flying under the radar, but I saw a lot of potential there.  That potential became glorious reality with his Purple Haze Paso last night.  What an amazing performance!  I've already rewatched it several times.  Not only did Donald have the aggressive attitude required of the Paso, his actual dancing was really, really good.  The shapes he made with his arms were gorgeous, his posture was perfect, and his footwork was flawless (loved those high kicks!)  He was in command on that dance floor!  I still can't get over that crazy drop spin Peta did (with Donald's assistance) at the end of the routine; that was insane!
Jen: I believe we are unanimous among the people over five-years-old in this group!  I was so smitten with Donald and Peta this week.  Their syncopation and heat bowled me over.  Donald is becoming my favorite male dancer.  William Levy, you are still my favorite in all categories, so do not be alarmed.  William this is just a side note: you wore too many items of clothing this week.
**Mother’s Note** Gracie is under the weather, and under the influence of a fever in tandem with cold medicine.  Please take that into consideration when you read her answers.
Gracie: If I dance to it, that means I like it.  So Gladys was my favorite this week because she made me get out from the covers and dance.  Those judges just don’t know a great dance song.  It’s too bad really.

This Was Definitely Not Your Dance - Worst Performance:

Michelle: I love him, I really do, but William and Cheryl had a bad jive!  It is not a strong dance for Cheryl as it is, but it was clunky and uncoordinated.  I will give Cheryl the fact that she lost her shoe and was off balance, but the sharp kicks weren't there. Better luck next week!
Tracie: Disclaimer: The Tango is my favorite dance, so I get bent when I see celebs doing it badly.  Sherri Shepherd's Tango was actually painful for me to watch.  I don't know if it was the height difference between her and Val or if she just couldn't manage the sharp, staccato movements of the dance, but her Tango was a hot mess that bore very little resemblance to the real thing.
Jen: I didn’t feel the magic in Sherri and Val’s performance this week.  I love to see an amazing dress that flows while dancing the Tango, and it sounds silly but I feel like that was a missing element for her to pull it off.  It might have given her the umpf she needed to work the moves; feel the dance in her soul.  Make no mistake; Sherri was rocking the “rocker chick” look; I loved it!

The Tina Sparkle Award for best use of sequins and spandex:
Michelle: I didn't have one outfit this week that had me all over.  I think that Maks and Melissa were my favorite. Very dramatic and fitting.  Speaking of Maks, you can definitely tell he and Val are related with them showing off their chests.
Tracie: I was mesmerized by Peta's purple gown.  It fit her so beautifully (love that low dip in the back!) and the diaphanous skirt was so floaty and glittery and perfect.  Love!
Jen: I loved Katherine’s look tonight.  It felt like she channeled the famed comic book star Barb Wire.  The girl can rock the leather!  Peta in her smoky violet gown was a show stopper!  Gorgeous!  I could not take my eyes off of her.
Gracie: I liked Melissa and Maks because the guy looked like Bugs Bunny in that one cartoon where he fights the bull all the time. 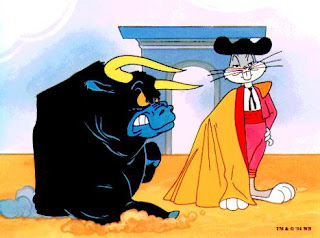 STOP STEAMIN' UP MY TAIL!

This just in . . . the wardrobe department hates you!
Michelle: The boys in the dance troupe looked like runaways from the local sex club! I did not like Katherine's good girl gone Goth look at all.  She should have been in something slinky and with a dramatic splash of red.
Tracie: I don't think the rock wardrobe did any of the female celebs any favors, but it was pro Kym Johnson's gown that made me cringe.  The red, sparkly dress itself was fine, but it looked like some huge leopard-printed boa constrictor was slithering up the left side of her body and preparing to wrap itself around her neck!  It was visually disturbing!
Jen: I was not a huge fan of Jaleel and Kym’s wardrobe tonight.  It felt like the stylist added one item too many with the red, and the leopard items.  It was too much of some great elements, and when added together they represent a “Glamour Don’t” moment.
Gracie: There was nothing I liked in this show that they wore.  They need to wear more pink and then I will be happy.

What were the judges' smoking?
Michelle: Len was definitely not in sync with the other two judges tonight.  He did either higher or lower scores on everyone. The judges dinged almost everyone tonight, but I think because they have started out giving such high scores they have kept the scores in the 7 + range.  They gave quite a few 8's that were not deserved.
Tracie: I'm still laughing over Carrie Ann's comment that she was trying to offer the contestants' constructive criticism this week as if that's something she doesn't normally do!  Hee!
Jen: When Carrie Ann said to Donald and Peta, “What did I just see?  It was the most psychedelic, bizarre, sexy, raunchy, hot damn!”  Wait, what?!?  Which was it?
Tom Bergeron's best one-liner:
Michelle: "Up next the man who brought tears to his own eyes, but not the judges."  So true! I have to admit to being biased against Jaleel White after his bizarre behavior last Monday and his subsequent outbursts defending his actions. I laughed when Tom fired that shot off.
Tracie: "Welcome back to Mimes Gone Wild."  Tom said this with a smirk after we returned from commercial break to find two of the unitard-and-KISS-makeup-wearing troupe members doing some sort of bizarre interpretative rock dance.  Hee!

Jen: In all transparency, I did not pay attention to Tom as I probably should have.  I had a difficult time focusing on him after cut-away shots of the celebrities in the audience.  This was Jen, “Oh look! The Hoff!”  “Oh look! Little Richard!”  “Oh look! John Stamos!”  “Oh look! J Love!”  See, you get the picture.  My reaction was not based on my level of celebrity love for those in attendance.  I just can’t help but wonder why they are there, and then it’s all downhill with my curiosity from there.  Why didn’t Blackie Parrish come last week to see Frisco dance?  Will “The Hoff” grab a burger after this or has he sworn off of them since the release of the drunken Wendy’s incident on tape?  See, it’s a problem for me…

The "Oh, Brooke!" moment of the week:

Michelle: To Gladys:  "You were inducted into the Rock and Roll Hall Of Fame. Do you think that helped you?"  And once again, Gladys looked at her with that "oh honey, you are dumb" look on her face.

Tracie: I'm sorry, I can't remember anything Brooke said this week because I was too busy staring at that crazy, teased up rat's nest of hair attached to the back of her head.  What were the DWtS stylists thinking?

Jen: The Maks hair pulling incident of 2012.  It was not Brooke’s fault; rather I think it was sabotage from the stylists.  I think that they planned this backstage with Maks, and it went off without a hitch.  People can be so cruel…
Gracie: What happened to Brooke’s hair, Mommy?  She didn’t brush the conditioner through her hair in the shower like you make me do?  That’s what happens, people when you don’t shower correctly!  She will cry when she brushes it before bed, and that makes me sad.

Time to hang up your dancing shoes:

Michelle: I think the bottom three will be Jaleel, Gavin, and Gladys.  I think it may be curtains time for Gladys, unfortunately. While her dance tonight was entertaining, I don't think it will be enough to keep her on. Too bad as I really enjoy Tristan.

Tracie: It's a really tough call this week.  I have a feeling Gavin Degraw is going to be safe as people will think he needs votes after being in the Bottom 2 twice.  Melissa Gilbert was rushed to the hospital post-performance with a potential head injury, so viewers may throw her sympathy votes.  I wouldn't be surprised to see Gladys Knight in the B2 since the judges seem to want her gone and are scoring her accordingly.  I'm going to go out on a limb and declare that Jaleel White is going to get the hook.  His dancing has only been okay since week one, his judges' scores are on the low end of the spectrum, and he's gotten a lot of negative publicity from the "alleged" fight with Kym last week.
Jen: I never saw Jack Wagner being eliminated so soon, so I feel a little inept at choosing the one going home.  I think the bottom three will consist of Gladys, Gavin (God love you), and maybe Jaleel.  The couples who were outstanding in the judge’s eyes in previous weeks received some very low scores this time around.  I do not think the loss of points for the leaders will send any of them home.

Gracie: If they don’t start wearing more pink, they should all go home and never come back!