A Change in the Roster

“Mom… I am going to have to do something I never thought that I would do…” Ryan said to me as I drove him to a “repair” haircut. My stylist needed to repair what someone at a walk-in hair salon had crafted unsuccessfully. Can you picture Johhny Depp in his role as Willy Wonka? That would be my son’s current look, and it wasn’t by choice. He wasn’t so keen on another trim to fix said hair disaster, until his older brother confirmed that Ryan’s coif was similar to my mother’s “old lady hair.” Ouch!

“What is that buddy?” Yeah, it was 50/50 whether or not I wanted to know the answer to this question. You never know what will pop out of a thirteen-year-old’s mouth.

“I am going to have to reorganize my football teams. You know, which ones I like and in what order they’re a priority to me to cheer for...” It amazes me that my middle child can push every button my van’s dashboard, using every finger on his two hands, at the same time, and still carry on a coherent thought. “You know, it’s a lot to consider.”

“Ry, you can still like the Colts buddy. It is going to take a while for them to re-establish, but in time they will be back. We shouldn’t abandon ship just because Peyton has left the team.” I thought it might be a great time to introduce that lesson about not being a “Bandwagon Betty.” Stick with your teams; be loyal through thick and thin.

“But they abandoned Peyton, Mom. He didn’t leave them!” Oh the convictions a teen can lay on you. “He should have been able to stick it out mom. Stay in Indy. Play until he was done, like done for good and retires. I don’t think that I can cheer for the Colts. Not right now anyway. It hurts too bad that they let Peyton go, Mom. I mean, he was crying, Mom! Where’s your compassion?!?”

“I know he was upset, Ry. He spent more years here in Indy than really any one place probably. At least as a man; a grown-up. I cannot imagine how difficult it was for him to stand on that podium and speak from the heart today.” Suddenly, I felt my seat warm to an uncomfortable temperature. It was not a hot-flash, nor a moment of warm emotion for our dismissed quarterback. Ryan is infamous for turning on the air condition and also my seat heater without me noticing; at first. I only notice after one set of my cheeks freeze, or sweat depending on which set you are referring to. “Hey! Turn that stuff off, Ding Dong! My butt is on fire!”

Ryan’s laughs and makes amends for his prank. We passed through several stop lights in silence. I was reflecting on the years Peyton Manning has spent as an Indianapolis Colt. What he and his wife, Ashley, have contributed to the city philanthropically. And he is a funny, funny guy. His commercials and SNL appearance are always tops when it comes to laughs.

Peyton doesn’t want to retire. He wants to play. I have no idea what it is like to have the competitive NFL blood that runs through Peyton’s veins. I can’t judge his choice to look for another city to suit up for; I will have a difficult time seeing another jersey on his back. If it were me after several neck surgeries, I would be home with my twins as much as possible and continue to sell the snot out of products on commercials. That’s a pretty great life. That is not the life Peyton wants, and I respect that. I do not like it, but I get it, Peyton. I get it. We are going to miss you. Know that with each day that passes, we wait like anxious children on Christmas Eve to hear about your new location. There is no way I could ever call it your new hometown. I just can't.

“Mom, so I am thinking it is gonna go Packers and Saints as my 1-2 teams. There might be room for the Ravens in there, but the Patsies (also known as, excuse me while I clear my throat – The New England Patriots – ahem) are totally last on the list.”

“Why are they even on the list, Ryan? They should be off the grid!” And with that battle cry, it seems as if football season, in my house at least, has begun. 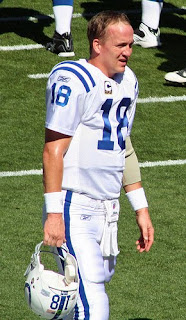 Photo by Jeffery Beall
Posted by Unknown at 7:17 AM