Q & A With James Goertel

One of the things I love about being a writer, is meeting new people.  One of those amazing finds, is James Goertel.  I just finished his book, Carry Each His Burden, and was overtaken by the characters, and their lives, in each of the five short stories.  I told James, that I would have finished this book in one sitting if it were not due to the fact that I have three children who want me to clothe and feed them incessantly.  You know the books that stick with you?  That is this book.  You are in for a treat, because James was so fabulous to stop by and chat with me!

James was born in North Dakota, and spent twenty years working in television for ABC,  NBC, and ESPN, among others.  He currently teaches writing at Penn State Erie.  His writing has appeared in Ascent Aspirations, LucidPlay, Manifold, and TNBBC.  "Carry Each His Burden" is his debut fiction collection and was published in September of 2011. His debut poetry collection "Each Year an Anthem" was published in early 2012 and will be followed by "With No Need for a Name" later this year. He is currently working on his debut novel "Let the Power Fall" which is slated for early 2013. He lives with his wife Rachel and son Henry on Lake Erie in Western New York.  Can I just say, Henry has the most gorgeous curls?  Future ladykiller... 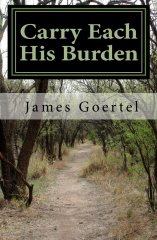 Jen:  Carry Each His Burden, gave me so much food for thought.  So much so, that I could not shake it, or stop dwelling on it, while watching Mad Men with my hubby last night (shh… don’t tell him).  I never want to be a “spoiler” for those who haven’t read the book yet, but you deal with some “meaty issues” in each of the five stories, and do it with finesse.  What was it like for you living with these gritty, and flawed, people when trying to move them from your head and onto the paper?

James: I always say that if the characters aren't speaking to you, the story isn't working. Once the characters, such as King, Charles, etc., begin chatting to me in my head, I know I better get it down. I will get up in the middle of the night to write if King wakes me up and lets me know he needs to go into the bathroom at the bar to sniff some meth. That kind of thing. The characters need to tell you what they are going to do, not the opposite. Otherwise, I would have told King to go home because he's already done enough meth and we're both tired. 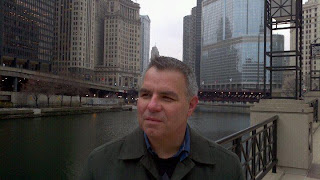 With love from "The Windy City"


Jen: I would love to hear about teaching at Pennsylvania State University and how working with college students came to be.

James: I spent twenty years in journalism - working all over the country for ABC, NBC, ESPN, and many others. After my wife Rachel and I had our son Henry a few years ago, I decided it was time to get off the road. So, I went back and got my masters degree and we moved from Pennsylvania to New York to be near family here on Lake Erie. Working and teaching at the Erie campus for Penn State has been as thrilling as the time I spent in the trenches of journalism. I could have never guessed how much I would enjoy working with students.

Jen: Do you have an established writing routine?  I am afraid you might cheat, so I am not telling you what mine is.


James: I have no routine. Once I'm into it, I'm off to the races and will write whenever LIFE allows. Everywhere and anywhere. The road maps in my car's glove compartment are all written over. I'm more dangerous than people who text while driving - I've been known to jot notes while out on the road... but that's a secret. Shhhhhh. 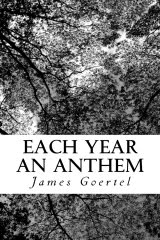 James other amazing work, Each Year An Anthem

Jen: Would you like to share a little bit about your current work in progress?  I know it has to be fabulous, because I had to talk you into just taking a moment for a brief “beer break” on St Patrick’s Day.


James: I'm currently working on my debut novel, Let the Power Fall. It's a piece of historical fiction that moves back and forth between the past and current times. I've been reticent to talk too much in detail about it, mainly because I think it's a unique subject matter and although historical in nature, the novel-in-progress speaks directly to the present and our place in it. I have also compiled a second book of poetry, With No Need for a Name, which I culled from my time in the masters program. I stopped writing for the most part when I went back to school, but allowed myself a few lines every few nights or weeks. Upon reflection they really seemed to capture something unique for that period of time. They are stills or snapshots really. I'm hoping to have the novel out in 2013. I am currently in a PhD program as well, so all timelines are subject to change. The second book of poetry is ready to go. I'm actually proofing it today, but I have no idea when it will drop.

Jen: The Hunger Games, and the young adult genre in general, is sweeping the nation.  What book first swept you away as an early reader?

James: Probably The Martian Chronicles - but honestly, I read a biography about Willie Mays when I was in grade school that knocked my socks off. Some things were ruined for me as a young adult, I was made to read Faulkner too early. You have to live a little before you tackle him. I loved Jaws when it came out - uh, '75, I think. My mother cut the sex scene out with a scissors. Classic Catholic upbringing. Love it.

Jen: Is the book you mentioned the one that led you to want to be a writer?

James: Jaws to some extent, maybe, thinking back now. I have always thought that commercial literature and films are just as valid as the classics which maybe aren't necessarily commercial. My first serious writing was screenplays. I have always thought of the connection between films and books. I actually approach my fiction more as a movie maker than an author. I have a script being read in Hollywood now, but that's just fun to think about and nothing to dwell on. L.A. can love your script to death - I mean that literally. I'm more vested in my novel at the moment. To answer, though, Charles Bukowski and Jim Harrison's work made me want to be a poet and James Dickey's Deliverance made me want to be an author.

Jen: I can see your approach in writing the book with a script feel, because as I read it I saw it "play out" in movie form in my head.  When I reach that place as a reader, I am sucked in. 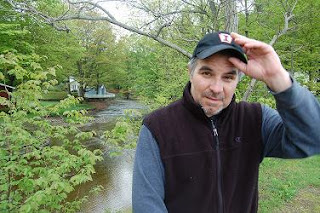 Jen: Okay, last question…  You have the entire Ryba’s Fudge Shop at your disposal on Mackinac Island, MI.  In what flavor-order do you devour the goods?

Thanks so much for stopping by, James!  You can find out more about James by clicking on James Goertel / website  To check out his phenomenal work, head to  James Goertel / on Amazon